This year Terra di Siena Film Festival arrives to be adult with its 18th edition. This event is obviously and specially dedicated to the cinema and to its world from different angleshots and prospectives. That is the case of the book “Signore & Signori… Alberto Lionello” written by Chiara Ricci.

Why did you choose precisely Alberto Lionello as object and subject of your book?

The meeting with Alberto Lionello happened absolutely by chance. I remember I was studying to prepare my exam of Doctorate focused on Salvador Dalì, Luis Buñuel and the Surrealism. I am accostumed to study and to write listening on the background a dvd of mine and that afternoon I decided to put on “Il piacere dell’onestà”. Here played Alberto Lionello and Erika Blanc. I was totally ravished so I stopped to study and immediately I send an e-mail to the actor’s daughter, Gea, an actress too. I wrote her that I wanted to do something for his father even if I did not know what. But.. I felt that it was the right thing to do. And that same day I began my researches.. so my book and the namesake show (followed by me and my Editor AG Book Publishing) which will be free opened in Rome, in the Theatre’s House, until 19th October. It has been an interesting voyage to the discover of an immense artist and of a man with a deep and complicated personality.

Dubber, actor in theatre and cinema, showman on tv. All of this is Alberto Lionello. in the evolution of this third millennium about thise sectors.. to be polyhedric is it a value or new professional figures will go towards the selective specializing?

Well, it is sure that actors of the same caliber of Alberto Lionello it is difficutl to meet. The actor born in Milan has worked and has left his mark in all of artistic field in the show. But he has been penalized by his being polyhedric, aboveall in the Seventh Art. But Lionello during hif fortyfive years of career has not renounced to nothing. He decided to remain faithful to his love, his passion for the show and, particularly, for the theatre. Personally, I hope there could be talents so real but it is true that today the “market” is different, too. The theatre is changed, the cinema imposes a certain kind of characters and products and the tv does the same thing. The products created are different from those which were realized many years ago. The important thing is to leave places to true talents: they often cannot enjoy the space they deserve.

How was born your presence to the Terra di Siena Film Festival and what is its valence?

This is my second participation to the Terra di Siena Film Festival and I am deeply proud of it. All of this was born in 2012 when I contacted Maria Pia Crbelli, foundress and directress of the Festival, suggesting her the presentationf of my first book dedicated to Anna Magnani with a photo’s exposition showing part of the material coming from my parsonal archive dedicated to this actress. And so it was, with my great joy. And this year Miss Corbelli invited me to take part for the second time with my book “Signore & Signori… Alberto Lionello” and I take chance for thanking her for her confidence, to welcoming me in her Festival giving me, in this way, a new and important chance as author and writer about history of the Theatre and Cinema. 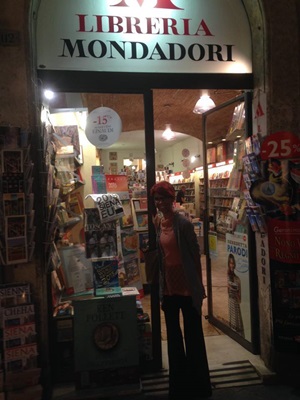